Many cultures celebrate the harvesting of a food crop. Some do it to signify the importance of the crop to their culture, while others do it to pay homage to the gods for giving them a plentiful bounty. The Igbo of southwestern Nigeria is one such culture. The Igbo hold the New Yam Festival each year to signify the start of harvest for their main food staple, the yam. 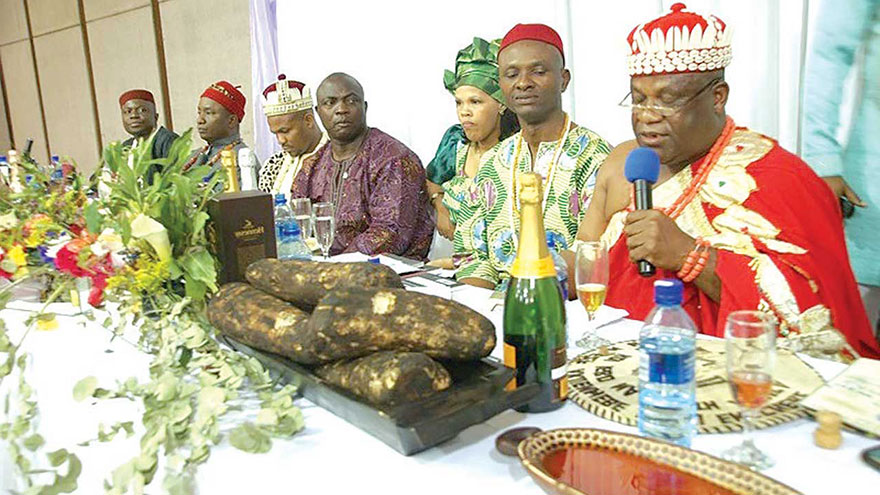 The Igbo of Nigeria

The Igbo, sometimes known as Ibo, are a group of about 5.5 million people located in southwestern Nigeria, also known as Igboland. The Igbo are the second largest group of Nigerians, but within the Igbo are many subgroups with their own customs and culture.

Nonetheless, they share one common language: Igbo. The Igbo language is part of the Niger-Congo language family. Just as there are many subgroups within the Igbo, so are there multiple dialects within the language.

Yam as a Main Food Source

In addition to a common language, the Igbo share yam as the staple crop that sustains the people. The tuber can be stored for six months without refrigeration, a major benefit since the geographic region experiences periods of food scarcity. During that time, the Igbo can draw on stored yams to sustain their families.

Uses of Yam in Igbo Culture

The Igbo treat yam, which they call ji, as a main dinner course due to its versatility. The yam can be fried, grilled, smoked, barbecued and may even be grated to be used in dessert.

Despite its versatility, most often the yam is cut into pieces and boiled. The Igbo sometimes pound the boiled yam with a mortar and pestle to create a starchy paste called pounded yam. Also, the yam can be sun-dried, then milled to create “elubo,” a powder mixed with boiling water to create “amala,” a paste that’s used in stews and sauces. In fact, fluid from an uncooked yam may cause a person’s skin to itch.

This celebration is known as Iri-ji or Iwa-ji, depending on the dialect of Igbo. Yams are the first crops to be harvested by the Igbo during growing season. The festival occurs around the beginning of August, at the end of the rainy season. It is viewed as the end of one work cycle and the beginning of another. The festival is a way of showing that there is an abundance of food for both harvesters and friends alike.

The yam is to the Igbo what the potato is to the Irish. A shortage of yam would present a major problem for the Igbo. During the festival, the first yam is eaten by the oldest Igbo, a sign of respect and an acknowledgment of the importance of the yam and elders within the community. These rituals are also meant to pay homage to the gods for a good crop.