All cultures have their good luck charms, but the Chinese have an especially rich system of lucky colors, symbols, sounds, numbers and foods.

Desserts in general are considered lucky because they symbolize sweetness in life. Some desserts are particularly lucky. And no, fortune cookies are not among them. The moon cake is perhaps the luckiest Chinese dessert of all. 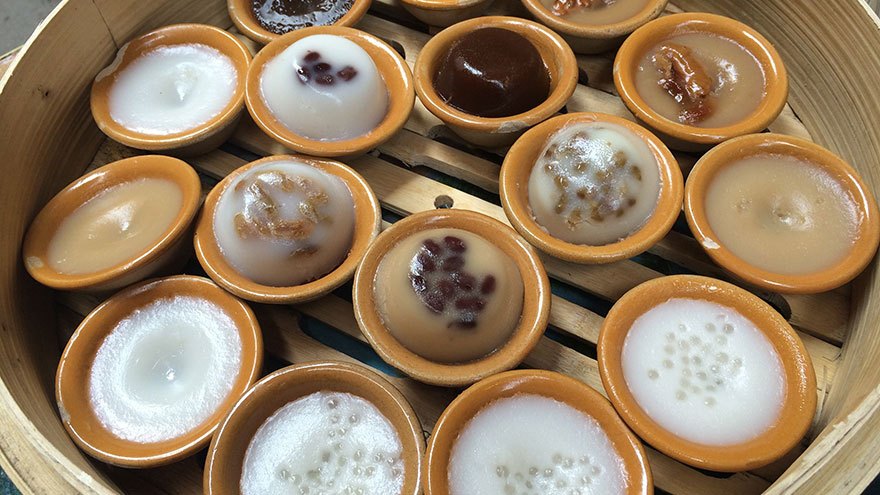 Every year, the moon closest to the autumn equinox shines especially brightly. In Chinese lore, this is because Yang, the male principle, is making his annual visit to his wife Yin’s home.

Chinese and Vietnamese people celebrate the Moon Festival for a week, starting on the 15th day of the Chinese lunar calendar’s eighth month. This harvest celebration is also called the Mid-Autumn Festival. People give moon cakes to their loved ones for good luck.

These lucky cakes have a thin crust and are stuffed with red bean or lotus seeds. Sometimes a salted duck egg is in the middle. The yolk symbolizes the moon’s color and shape.

Traditional moon cakes bear a decorative stamp on top, usually spelling out the word “harmony” or “longevity,” along with an image of the moon or the goddess of immortality for added luck.

Young Chinese Americans have been known to insult the dense nature of moon cakes by calling them “hockey pucks.” Modern interpretations update the traditional flavors, using champagne or tiramisu in the fillings.

Chinese Americans have introduced chocolate and orange marmalade to the lucky treat. In some Asian countries you can even buy ice cream moon cakes and Starbucks-branded moon cakes.

Not a fan of moon cakes? Don’t worry, you won’t miss out on good luck. Instead, try fengli su, or pineapple cakes, a lucky treat in Taiwan. These buttery, square pastries with pineapple filling are also a popular tourist souvenir.

Pineapple became lucky because in the Taiwanese language it sounds the same as “wealth comes.” During the Chinese New Year celebration, nian gao, or “year cake,” is a favorite Chinese sweet. The word “gao” sounds like high or tall, so this dessert symbolizes new heights the eater may attain in the new year.

If you visit relatives during Chinese New Year, you might get to snack on a “tray of togetherness,” a tray with eight compartments filled with coconut, red melon seeds, kumquats, longans and other sweet, symbolic treats.