Peking duck is a Chinese dish of crispy roast duck in pancakes with vegetables. During the Ming dynasty, cooks in the capital city of Beijing created this complicated preparation to serve the emperor.

Peking duck is named after Beijing (“Peking” is an older way of writing “Beijing” in Roman characters), where thousands of restaurants still serve it today. It’s difficult to make Peking duck at home, since the usual method of getting the skin crispy is to pump air under the skin in order to separate it from the meat.

This simpler method, however, should still give you a nice crispy duck skin. 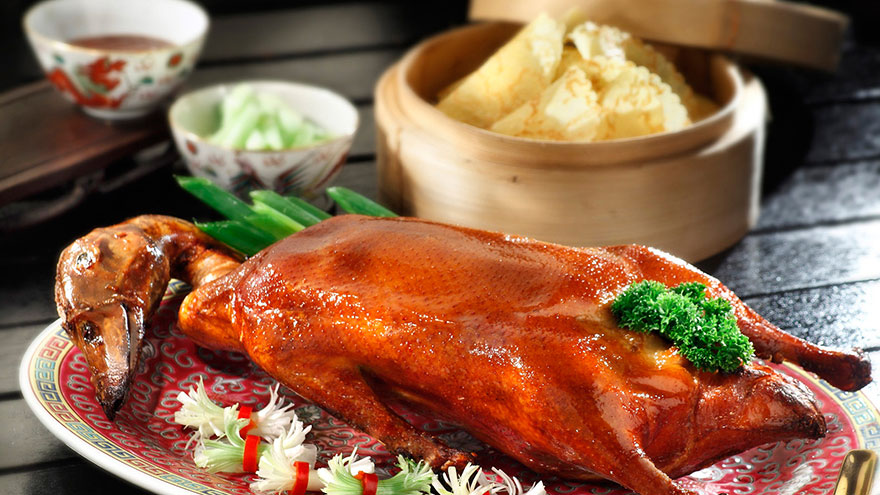 Lay the duck on a metal rack and pat it dry with paper towels. Gently loosen the skin away from the breast meat using the handle of a wooden spoon. This process lets air pockets form between the meat and the skin, which helps the skin get crispy.

Combine the maltose syrup or corn syrup and soy sauce and brush it over the entire duck. If the mixture is too thick to brush, heat it in the microwave for about 30 seconds.

Sprinkle the salt and baking soda over the entire duck. This will help draw moisture out of the duck, giving it a crispier skin. Refrigerate the duck, uncovered, for 12 to 24 hours, until the skin looks completely dry.

Place the metal rack in the sink and lay the duck on top. Pour the boiling water over the duck, making sure to hit all the skin. This will make the skin puff up and tighten around the meat.

Pre-heat the oven to 350; let the duck rest and dry while the oven heats. Roast the duck on top of a metal rack in a roasting pan for one hour, or until crispy and golden-brown, then reduce the heat to 250 and roast another 30 minutes. This will allow all the fat to render from the duck.

Heat a frying pan and grease lightly with cooking spray. Pour 1 tbsp. of batter into the pan and spread it out into a thin pancake. Cook the pancake for about a minute and a half on each side.

Let the Peking duck rest for 15 minutes, then carve it into slices. Serve on pancakes with green onions, cucumber and hoisin sauce.