Double sauteed sliced pork, or twice-cooked pork, is a popular Sichuan dish often featured on Chinese restaurant menus that can be successfully replicated at home with a little know-how.

Called huiguo rou in Chinese, twice-cooked pork is literally “meat returned to the wok,” in that it is prepared via two very different cooking methods. Skin-on pork belly is first simmered in salted water, cooled and sliced thin, then stir-fried along with a simple-to-prepare sweet and salty sauce and fresh vegetables. 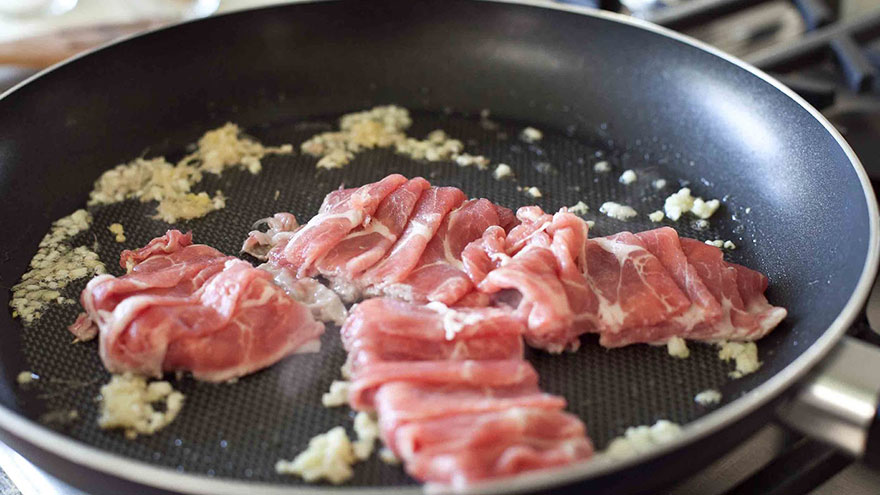 Place whole pork belly in a pot of generously salted water, and bring to a boil. Lower the heat to a simmer and cook for approximately 40 minutes, or until the pork is cooked through. Remove from water, drain on paper towels and let cool. Chill the pork belly in the refrigerator so that it firms up and slices more easily.

When the pork belly has cooled, pat dry with paper towels, and slice it into 1/4-inch-thick rectangular slices with a sharp knife. Prepare a simple sauce by mixing together equal parts soy sauce, Chinese rice wine (or dry sherry), chili bean sauce, sesame oil and sugar in a small bowl.

Heat a small amount of oil in wok or large skillet over medium-high heat until shimmering. Add sliced pork belly and stir-fry, stirring constantly, until golden brown on each side, approximately 2 minutes. Remove pork belly from wok, and drain on paper towels.

The fat from the pork belly will have rendered some while cooking, so remove all but a small amount of the oil from the wok. Add any additional desired ingredients — traditionally, leeks and black beans are used — and stir-fry for 1 to 2 minutes. Return the pork belly to the wok and add the sauce, stirring until combined. Serve and enjoy.