Bread is a cornerstone of any traditional Moroccan meal. This simple staple is made daily in Moroccan homes and comes in many forms that are suited to specific meals.

Both flat and leavened breads work to sop up the last bits of a tagine — Morocco’s signature stew — and add carbohydrate bulk to almost every meal. 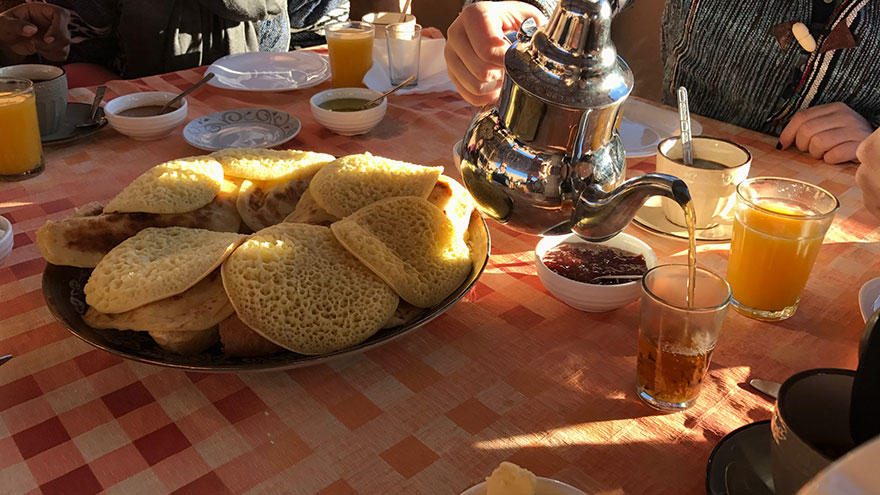 Of the many varieties of Moroccan bread, all are highly absorbent. In a country where hands — not knives and forks — are most commonly used for eating, bread is the perfect extension and serves as both a utensil as well as inexpensive filler.

Usually made from wheat or white flour, depending on regional traditions, Moroccan bread may also include barley, sorghum or millet.

Khboz milka is one of the most famous Moroccan breads and resembles a hearty rustic loaf of bread. The circular loaf is browned on all sides and is flavored with sesame seeds and anise.

Commonly served with tagines, this yeast bread is made out of white or wheat flour. Khboz bishemar is a similar circular loaf, but it is stuffed with spices and sometimes meats before being pierced throughout and baked. Once cooked, the flavors of the stuffing fill the bread and create a savory and nearly complete meal in itself.

The Moroccan equivalent of pita bread, batbout is a simple and soft bread that is prepared in small rounds and stuffed with savory ingredients for a quick meal. Cooked in a skillet until brown and puffy, these small breads are generally allowed to rise for about two hours before cooking in individual portions.

Most often sold in bakeries, batbout come either filled and unfilled. Soft and fluffy, batbout can make a standalone sandwich or be eaten alongside a savory meat or vegetable dish.

Made savory with the addition of seasonings like thyme and zaatar — a herb similar to oregano — this bread accompanies dishes as well as alone at tea time.

Harcha can also be prepared sweetened or without spices to be topped with preserves or other sweet toppings. Available at markets, this dense bread has a gritty crust and is filling alone or as part of a meal.