How to Cook Pinoy Beef Steak

Pinoy beef steak, also known as bistek tagalog, is a traditional beef and onion dish from the Philippines. It is a blend of salty and sour, and is commonly served over rice, with a sauce made from the marinade.

This recipe, adapted on ones from Pinoy Recipes and Panlasang Pinoy, uses traditional Filipino ingredients, such as calamansi. 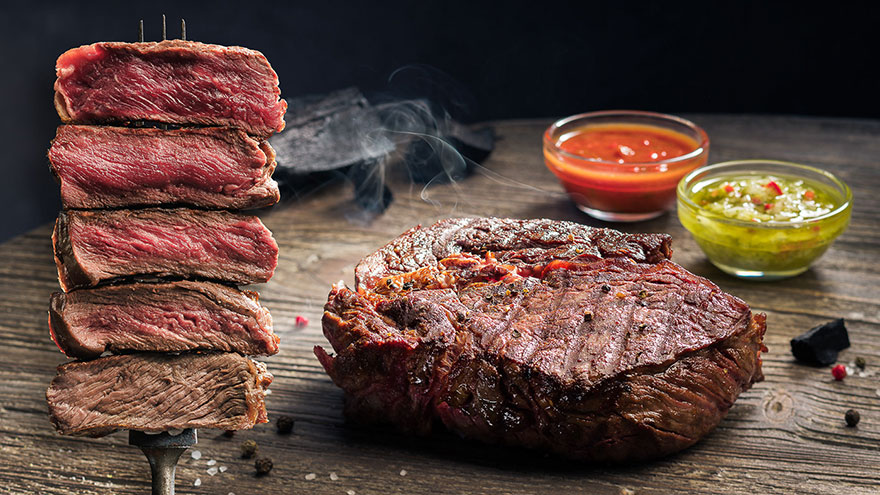 Slice the beef sirloin into pieces no more than 1/4-inch thick. Mix the soy sauces, calamansi juice and minced garlic in a medium-sized mixing bowl.

Tip
If you cannot find calamansi juice, substitute it for equal parts orange juice and lime juice. Calamansi are similar to the orange limes found in Latin America, and have a sour taste that is sweeter than lime or lemon juice.

To make it easier to slice the beef, put it in the freezer for 1 hour before slicing.

Add the beef to the marinade, cover and let it rest for a minimum of 1 hour. The dish is best if the beef has a chance to marinate overnight.

Heat a heavy-bottomed pan or wok over high heat. When hot, add the 3 tablespoons of oil, and heat until smoking.

Drain the beef from the marinade, reserving the liquid to be used later. Separate the slices to ensure none are sticking together, and add them to the pan. Cook the beef until it is almost done, around 3 to 5 minutes for sirloin.

Tip
If you cannot comfortably fit all of the steak in the pan at once, cook in batches.

Crowding the pan will lower the heat in the pan, meaning the beef will take longer to cook. A cooler pan will also mean the beef does not get as strong of a sear as it needs.

Remove the meat from the pan and pour in the reserved marinade liquid. Bring to a boil and cook until the sauce is thickened and reduced by at least half.

Add the beef and the sliced onions to the sauce, and toss, coating evenly. Season with salt if needed, and add a pinch of sugar. Cook for another 2 minutes before removing from the heat.

Tip
Adding the onions at the end leads to a stronger onion flavor and more toothsome onions. The onions in this dish should have a slight bite to them. They should not be soft.

Instead of beef sirloin, you can use less expensive, tougher cuts of beef, such as beef round, skirt steak or flank steak. In those cases, the beef needs to be simmered before sauteeing.

Marinate and slice the beef as directed.

Heat the pan and add the beef, along with the marinade liquid and 1/2 cup water, and bring to a boil over high heat. Cook for 20 minutes, adding water as needed.

Remove the beef from the pan, separating it from the marinade, when it is softened.

Saute and cook the beef as with sirloin, cooking over high heat, reducing the marinade and adding the onions at the end.