How to Cook Dumplings Without the Wrappers Getting Too Stiff

Asian dumplings define one-bite decadence, and have the thing all comfort foods have in common: simplicity. Although their fillings vary, their wrappers usually consist of only flour and water — the perfect container for whatever flavors the chef wants to deliver to your palate.

But with their simplicity comes frailty, manifested in a tendency to tear at the slightest pull, or to stiffen with only a few extra seconds of cooking. Since you can’t rely on the usual visual cues as you do with fried or baked foods, such as a golden-brown color, you have to look for other indicators of doneness, such as their crackle in the pan or their buoyancy in the water. 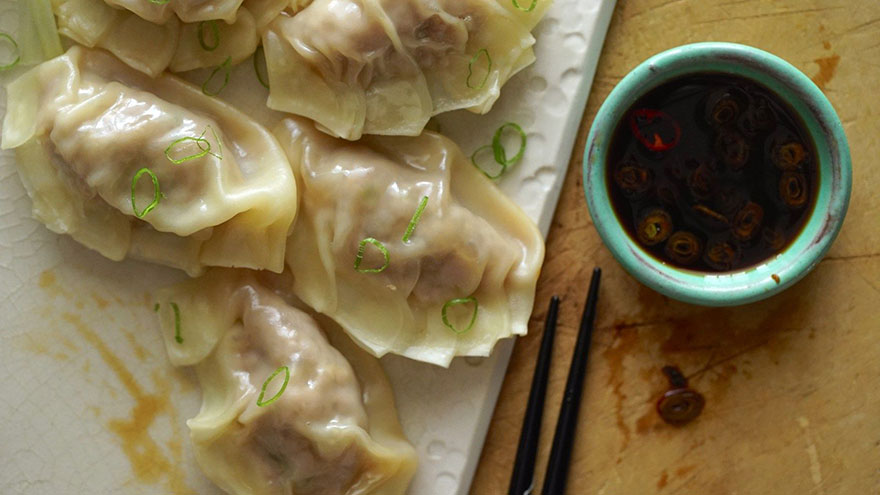 Remove the dumplings from the refrigerator and let them reach room temperature on a plate.

Pour about 1 tablespoon of vegetable oil, such as such as canola or peanut, in a nonstick pan. Heat the oil on the stove over medium-high heat until it shimmers, about 5 or 6 minutes.

Arrange the dumplings on their sides in a single layer in the pan, starting at the 12-o’clock position and moving clockwise. Space the dumplings about 1/4 inch apart.

Pour 1/2 cup of cold water in the pan and immediately cover it, leaving the lid slightly ajar; if you don’t have a lid, use an inverted saute pan or large plate. Steam the dumplings until you hear crackling and popping, about 10 minutes.

Remove the cover from the pan and cut open the first dumpling you placed in the pan — the one at the 12-o’clock position — and touch the filling to see if it has heated through. If it hasn’t heated through yet, let them cook uncovered for a few more seconds.

Remove the dumplings from the pan, starting at the 12-o’clock position and moving clockwise, just as you placed them — first in, first out — using a spatula or your fingers.

Fill a large pot to about 2 inches from the top with water and place it on the stove. Choose a pot wide enough to remove the dumplings easily when using a slotted spoon or a spider type skimmer.

Set the heat under the pot to high and bring the water to a boil. Remove the dumplings from the freezer, if frozen.

Place the dumplings in the boiling water one at a time. Stir them using a slotted spoon for about 1 minute to prevent sticking. Put just enough dumplings in at a time to fit on top of the water in a single layer when they start floating — about 10 to 12 dumplings in a 10-inch-wide pot. Allow the water to return to a boil.