What Is Korean Barbeque Marinated In?

Korean barbecue, or gogi gui, includes a wide range of different dishes and is traditionally cooked over a charcoal grill. Some Korean barbecue dishes are marinated, while others are not.

Although marinade ingredients vary greatly from dish to dish and from one individual recipe to another, there are some basic similarities that connect them. 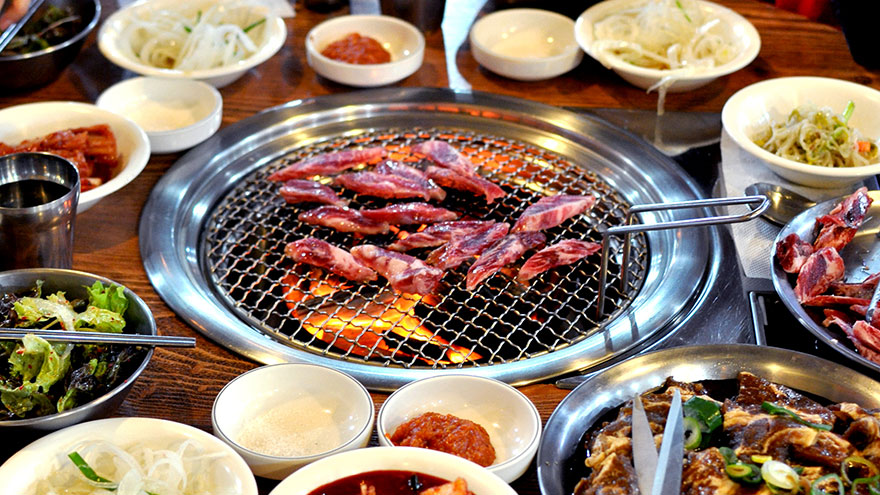 When most people think of Korean barbecue, they think of bulgogi, a type of thinly-sliced grilled beef often served with a lettuce wrap. Bulgogi marinade ingredients vary slightly from recipe to recipe, but they usually contain basic ingredients.

Soy sauce and sesame oil form the base of the marinade, while the dish’s characteristic flavors result from garlic, sugar, onions, ginger, black pepper and red pepper. Some bulgogi marinades also use an Asian pear, also called an apple pear.

Galbi marinades can vary in their thickness; some recipes call for the addition of water or wine, producing a thinner marinade than used for bulgogi. In other cases, the marinades may be almost identical.

Not all Korean barbecue involves beef, and not all recipes call for heavy marinades. Jumulleok can use either beef or pork, and its marinade is simple compared to that of bulgogi or galbi.

Jumulleok marinades contain sesame oil, salt, garlic and pepper. The meat is usually marinated for a very short time, compared to galbi or bulgogi, before being put on the grill.

Some Korean barbecue dishes are variants on the traditional classics. Dwaeji or daeji bulgogi is a form of spicy barbecued pork with similarities to beef bulgogi. The marinades for dwaeji bulgogi and bulgogi are similar, but dwaeji bulgogi has a key additional ingredient.

This is gochujang, a spicy paste made with soy beans, rice, salt and red pepper. The addition of gochujang to the bulgogi marinade gives the dish a powerful peppery kick.