How to Make Shabu Shabu

Think of shabu shabu as Japan’s version of fondue: thinly sliced beef and vegetables cooked at the table in a communal pot of boiling hot broth. A meal ideal for entertaining, it’s easy to prepare and gets the guests involved in the cooking in a fun, unusual way.

Ideally, you should use a shabu or fondue pot positioned in the middle of the table to keep the broth simmering consistently. If you don’t have either, prepare your shabu shabu in broth boiling in a saucepan on the stovetop; then transfer the bowls to the table 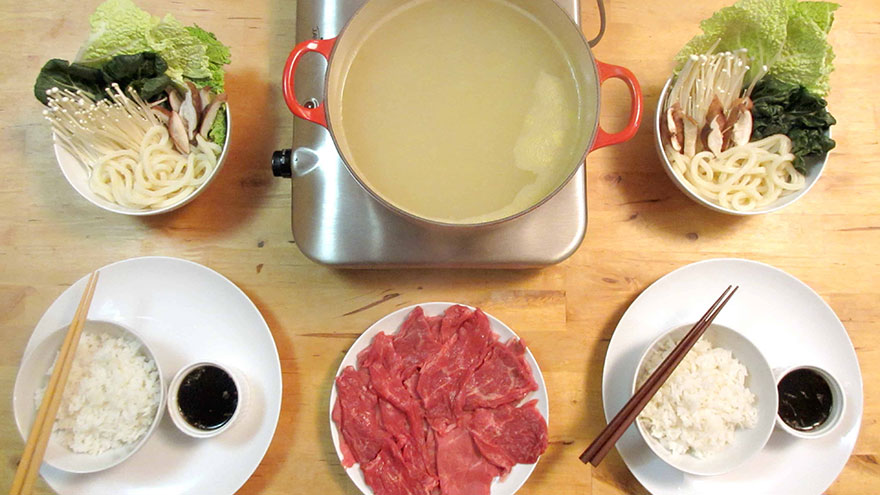 Pick a high-quality meat for your shabu shabu; don’t try to economize with cheaper beef. Options include rib-eye, filet mignon, tenderloin and sirloin steak. Cheaper cuts may be easier on your budget, but they may become tough and chewy in the broth.

Put the beef in the freezer for 15 to 30 minutes; then use a sharp knife or a meat slicer to cut it into extremely thin, bite-sized slices. You can also ask your butcher to do the slicing. Arrange the meat on a large platter for serving. If you’re preparing it in advance of an event, cover the platter with plastic wrap and store it in the refrigerator.

Any vegetable can be used in shabu shabu, though some may need pre-cooking. Hard vegetables, such as carrots and broccoli, for instance, should be pre-blanched before preparing them for a shabu shabu plate

Traditional choices — and those that don’t require advance cooking — include mushrooms like shiitakes, cubes of tofu, chopped cabbage or bok choy, onions, spinach leaves, bell pepper strips, shredded daikon and sliced green onions. Thinly slice all of the vegetables and put them on a serving platter, separate from the raw meat. 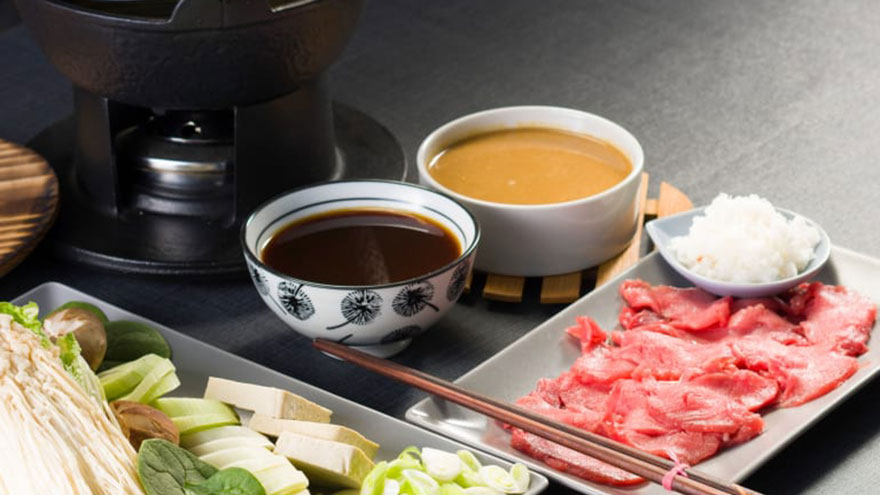 Pour homemade or purchased chicken, beef or vegetable broth or a combination of several of these into the shabu or fondue pot. Add whatever seasonings you prefer, such as sliced green onions, soy sauce, sesame oil, minced garlic and grated ginger. Bring the broth to a boil.

Alternatively, boil the broth in a saucepan on the stove and transfer the hot liquid to the tabletop. You can strain and remove the solids or leave them in for guests to eat with their meat and vegetables.

Allow your guests to take turns adding beef and their choice of vegetables to the boiling broth with chopsticks or tongs. Once both are cooked to their liking, they can transfer the ingredients to their bowl and spoon on some of the cooking broth, if desired. Make sure that you have a variety of dipping sauces available for your guests to flavor their beef and vegetables.

These can be as simple as soy sauce; ponzu; sesame sauce; a mixture of sour cream and wasabi; or a combination of soy sauce, mirin, rice vinegar, chopped green onions, grated fresh ginger and red pepper flakes.

How to Make Miso Soup

How to Make Sashimi

How to Throw a Sushi Dinner Party